Sir Mike Penning was delighted at securing re-election as the Member of Parliament for Hemel Hempstead in the early hours of this morning.He said:

“I am chuffed to bits with this result. It is a great honour to represent the people of this fantastic constituency and I am delighted to have been re-elected again – especially by such a margin.

I thank everyone who voted for me and who helped me during this election campaign.

We can now return to Parliament and put an end to the indecision over Brexit. I will back Boris all the way and we will leave the EU on 31 January.

We can then get on with the things that really matter – negotiating our future relationship with Europe and honouring our election promises on the NHS, police and schools.

Locally, I will continue to push for the new money promised for West Herts Hospitals NHS Trust to be spent on a new hospital on a new site – not wasted on a revamp of the Watford site.”

We're Investing in Infrastructure across our Country

When we came to office we promised to unite and level up, spreading opportuni

Borough and County Councillors pose on the steps of The Forum in Hemel Hempstead. One person is missing from the image - Cllr. Pearl Oguchi. 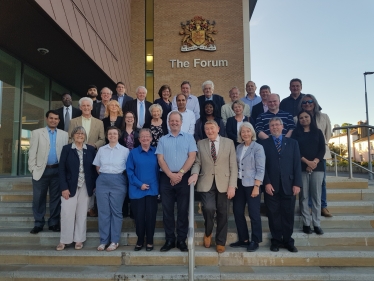 Hemel Conservatives and Supporters Page @ HemelBlue.
Get involved in the election! Blitz Teams being organised - Call 01442 255034 - all volunteers are very welcome!

Weekends will never be…

Battle of the Branches Quiz Evening

We're Investing in Infrastructure across our Country

When we came to office we promised to unite and level up, spreading opportuni

A Conservative Manifesto: £3Bn increase in spending and no tax increases, compared with Labour £95Bn increased spending and everyone pays a lot more tax!