Tina Howard has lived in Hemel Hempstead for over 32 years and is proud to live in a forward-thinking town with a very low unemployment rate. Hemel Hempstead is a lovely place in which to live, work and play. She wants to work with local people on the important issues including the need for a new hospital in West Hertfordshire, parking issues, state of some of the roads and other local concerns.

Tina’s husband died some years ago, so she has the time, enthusiasm and energy to take on the role of County Councillor. She has grown up twins, Justine and Jason and two grand-daughters, Alice and Grace.

Tina feels privileged to have been selected to stand for the Hemel Hempstead South East Division covering Corner Hall, Bennetts End, Nash Mills and parts of Apsley and Leverstock Green. A Borough councillor for the Apsley and Corner Hall Ward, Tina will work closely with you; our Borough Councillors and local MP Mike Penning to get the best for our area.

She has spent 45 years in the educational field, where she retired as a Headteacher. She then became involved in charity work with community activities and is a Director of local charity Community Action Dacorum. She is also a trustee of The Centre in the Park, working with elderly people. Her wide experience in Education is being passed onto the local community through her work as a governor of two Primary Schools.

Tina believes that local shops in the division should be supported and encouraged to thrive, as they are a very valuable resource in the area, and will encourage better community working and cohesion within the ward.

Apsley has undergone a major transformation following the regeneration programme conceived and implemented by the Conservative led Borough Council.  Unfortunately, not all of it has been positive because our Borough has been forced by the 3 main political parties to build more homes than we would 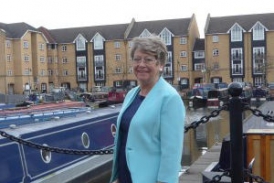